…the luxury of time… 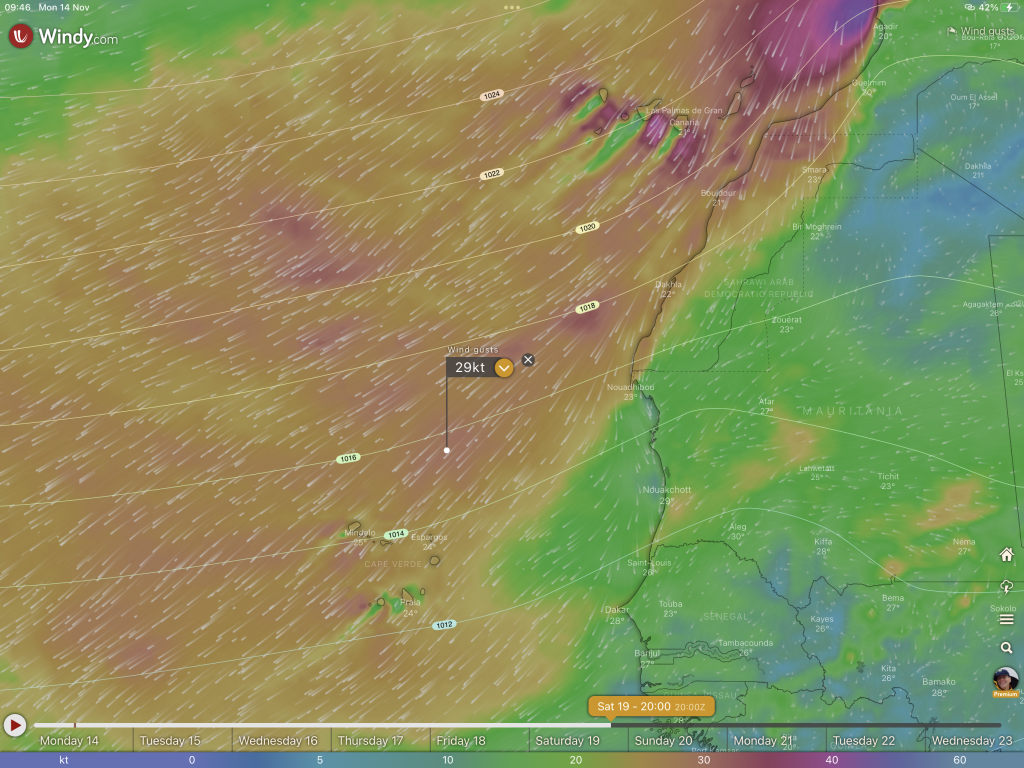 We have thrown the towels, both SY Sutje and myself. The high pressure system on the Atlantic has intensified over the last two days giving it another notch over night with expected wind speeds now in the second half of the journey of 35kn and waves up to 3m. We concluded, enough is enough.

The start would have been perfect but conditions are getting heavy – too heavy now – at arrival in Cabo Verde, which is a bit of a tricky approach same time.

We were pumped up and had all systems checked but gut feeling was not right, which was not caused by dinner the day before. Better slow and safe we concluded.

On the upside, both ships got a berth in San Sebastián de la Gomera and we plan there for a week until this huge high pressure system has moved further NE and more favourable winds are expected to take us to Cabo Verde and further on as per the plan. No change to that.

I am doing some final miles for stockpiling food and jumped into the saddle this morning to get some fresh tuna into the fridge for the upcoming passage. Our departure date has now been set to coming Monday @ 9am. Luckily the marina accepted us another night.

I went to the Pescaderia in Arguineguin about 10km west of Pasito Blanco. Full trip and additional photos can be seen under this link. Carrying almost 2kg of tuna in the rucksack on the way back. Upon arrival I shared with SY Sutje and SY Momentum of Fal, as we are all tuna addicts. 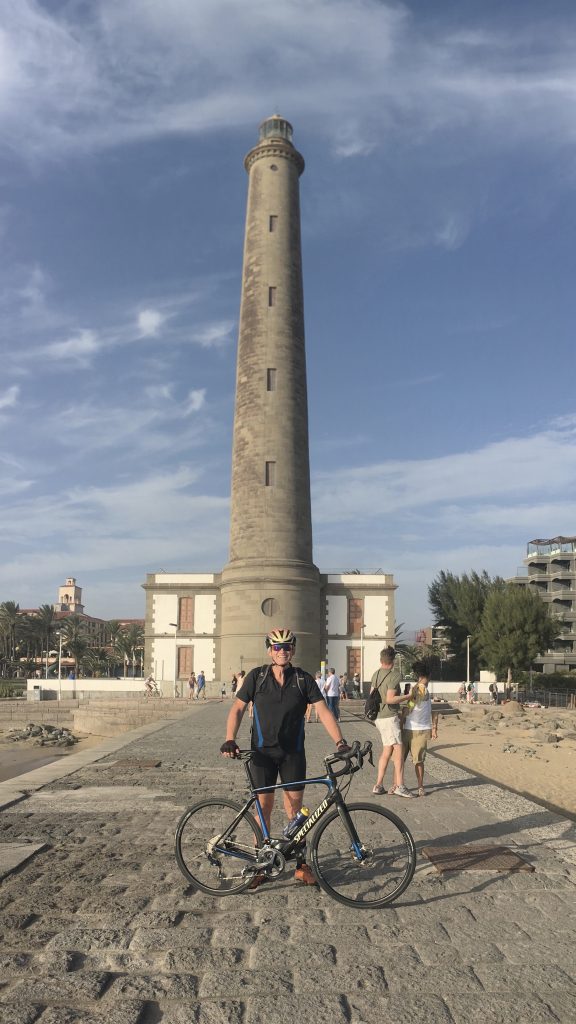 After completing various other jobs from the To-Do-List and a short siesta nap, I took another ride to Lidl, this time via Playa de las Meloneras, a promising route, new to me. Find some photos under this link.

Rushing back against the sunset – with, again, a heavy rucksack on the back – the focus moved onto cooking.

8pm, after dinner, was time for a round of Brändi Dog on SY Sutje, a parlour game we played before and I am still learning. It’s hard brain work at the end of another sugar day…but good fun and makes you even more tired.

Upon arrival at Marina Pasito Blanco, I went straight to the fuel dock to top-up our tank with Diesel. There might be pockets with no wind on the way to Capo Verde and better start with a full tank. While the initial stopover was planned for two nights, the weather forecast intends to test our patience. Perhaps we have to stay a couple of days longer rather than motor sailing the Atlantic. Let’s keep monitoring. We are not in a rush.

Will get some sleep now.

We are running down the western side of Fuerteventura heading for Pasito Blanco on Gran Canaria with an ETA tomorrow before lunch time.

A short stop-over is planned in Pasito Blanco for two very good reasons:
A) Reunite with Petra and Jan from SY Sutje joining the passage down to Cape Verde and perhaps later-on to the Caribbean. They have been in the boatyard to get their lady ready.
B) Meeting Babs and René from SY Momentum of Fal again. Perhaps time allows to have another bike ride together. They are currently in the boaryard at Pasito Blanco.

With the help of Jan, our reservation got confirmed, which is not a given at this time of the year, where peak season is in full swing with many yachts heading over to the Carribean.

Wind is a bit low but normally increasing during the day before taking a breather over night. This is the standard wind pattern I have observed during the time here on the Canary Islands. Exceptions as ususal.

Taking rest to be fresh for the upcoming full moon night, which heavily influenced my departure date.

At 8:30am, just after sunrise, I was on the foredeck taking the old foresail down. My intention was to check the tension of the luff against the halyard position. Clive and myself marked the max up position during the recent mast inspection to prevent any potential chafing at the halyard sheaves’ inlet at the top of the mast. If the eye of the halyard is getting too much dragged against the sheave, chafing will happen. Conclusion: Old sail should be okay but limit the tension to the marked position. I think it should work.

Now I was curious about the luff length of the new foresail. Got the damned heavy sack out on deck and then – what a relief – Ulli from SY Beagle was standing next to me giving me a hand, tow actually. We pulled the new sail up to learn, that its luff length is about 15cm shorter than the old sail. Perfect in terms of chafing. New sail down, folded, rolled, back into the sack and dragged  back under deck. Four hands instead of two keep things below grumbling and shouting level. Thanks Ulli! 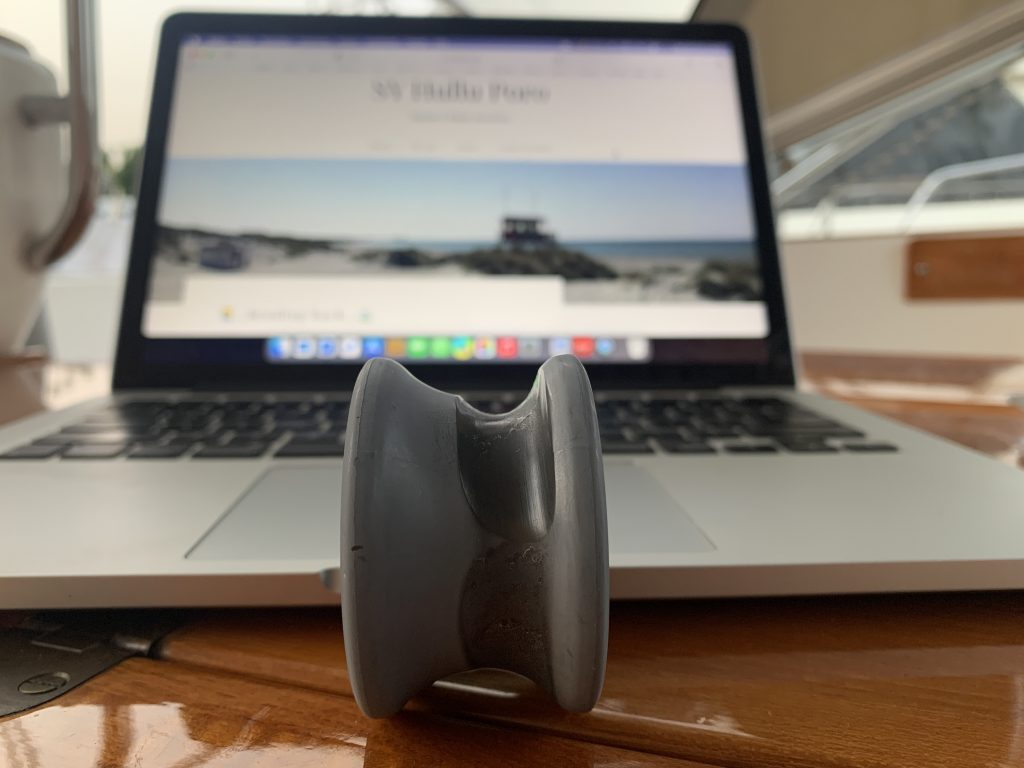 Two sheaves on the foresail traveller had to be replaced. As you can see on the photo, the sheets have grooved its traces into it and the circularity while turning was not given anymore. Some bolts showed galvanic corrosion. Parts got bedded into a new layer of Tikal Tek-Gel to prevent future blooming.

Besides that I pulled the 20 year old spinnaker halyard out of the mast, gave it a 4 Euro wash in the washing machine to get rid of calima and salt leftovers and routed it back into the mast via a pilot line. The shackle got de-rusted in some phosphor-water-mixture. All becoming sweet, soft and handy again.

Before jumping on the bike for my minimum daily ride to PDC, I fixed a reading lamp, which had a broken internal cable. Some brazing was required, not my core skill but it is back alive.

Following a nice sundowner on SY Beagle with Alice and Ulli, I am now ready to call it a day. Tomorrow, we will focus on the spinnaker pole arrangement and prepare for water maker membrane replacement, which is scheduled for Monday. 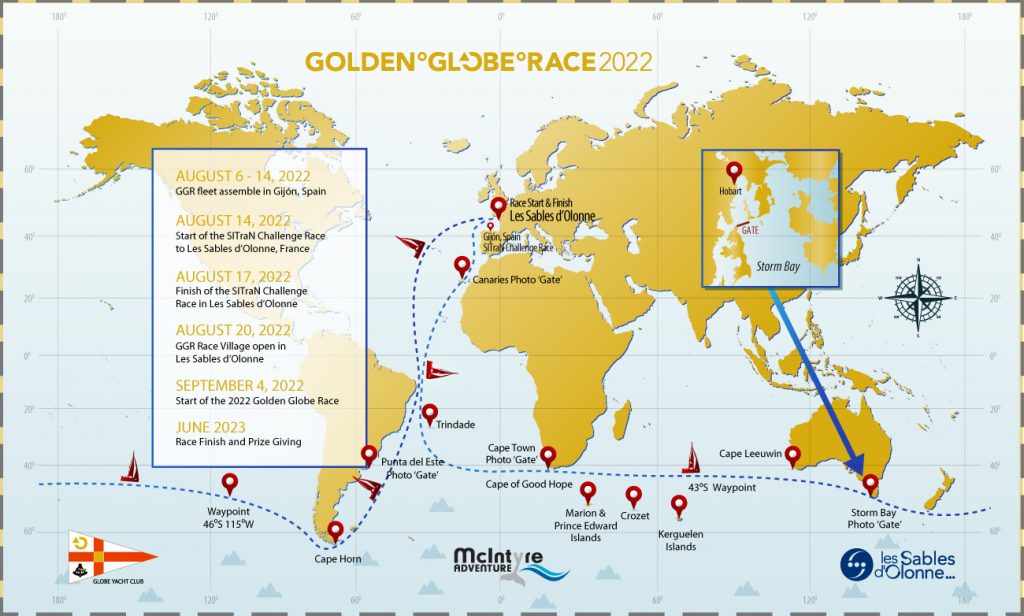 To me, the Golden Globe Race  is the ultimate race around the world. The conditions for this retro-race are driven by the first successful solo-sail around the world completed in 1968 by Sir Robin Knox-Johnston. Cross fingers for the girl (!) and the boys to come home safely. Fair winds… 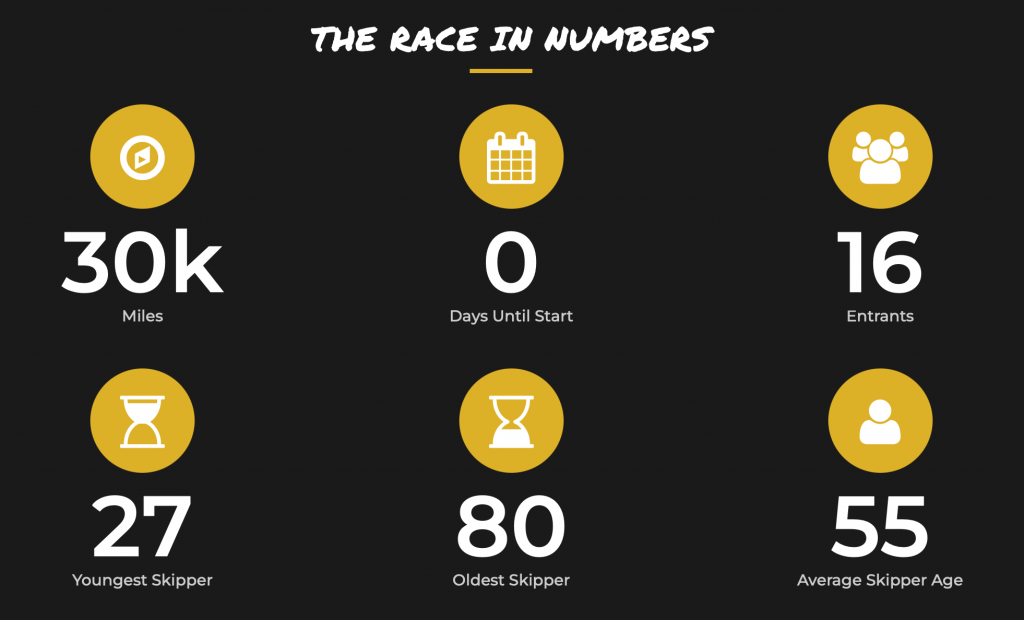 As sailors and live aboards you normally say “hello” to each other in different places following by “good-bye” shortly after. We are in contact while on the move but meeting in person at the time ships’ wakes are crossing itself gives the opportunity to update each other on the latest developments  and sharing new sailor’s  yarn  within the community.

Yoshi has just completed solo sailing the North Atlantic Circle returning from the Caribbean. After missing him first time in Cuxhaven we made it in Porto Santo/Madeirea and Rubicon/Lanzarote last year. Based on our sailing plans there is a chance that we will meet again later this year. 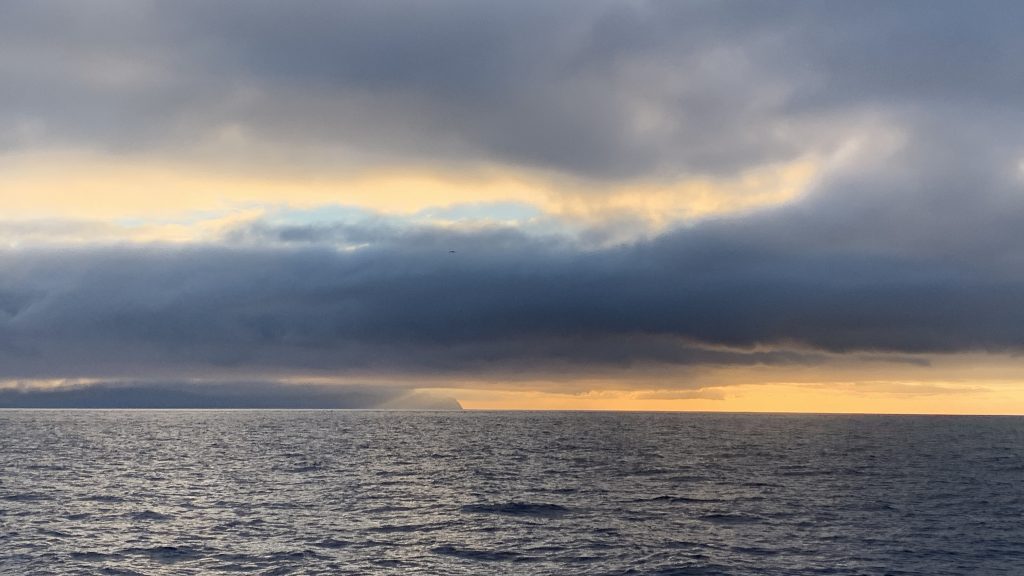 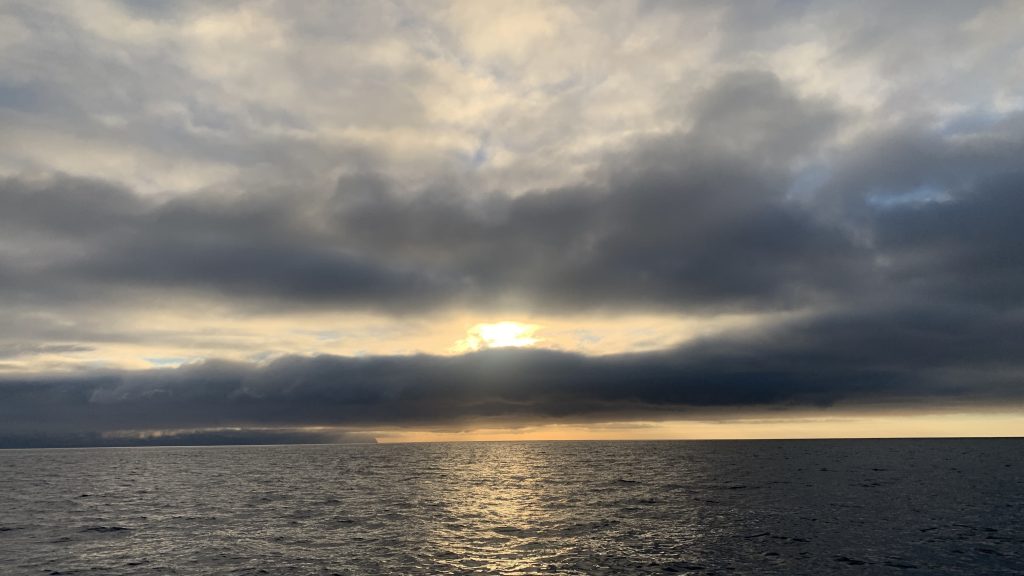 After an impressive sunrise, the engine is now back on for the final 12nm to the port. The mainsail started buffeting when the wave forces took over from wind forces and boat speed dropped below 2kn. Time left for me to tidy up the mess and take a shower before entering the marina. 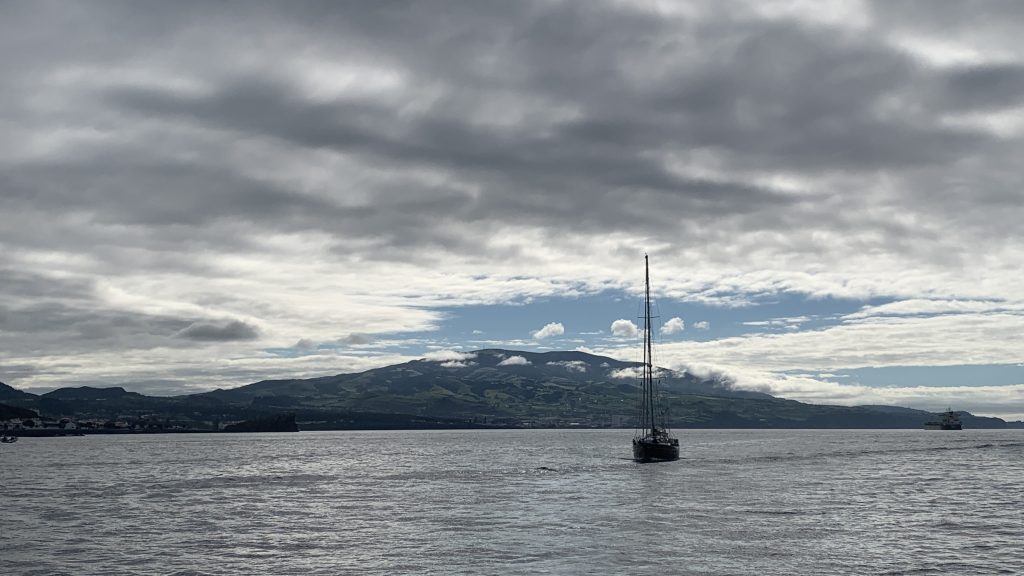 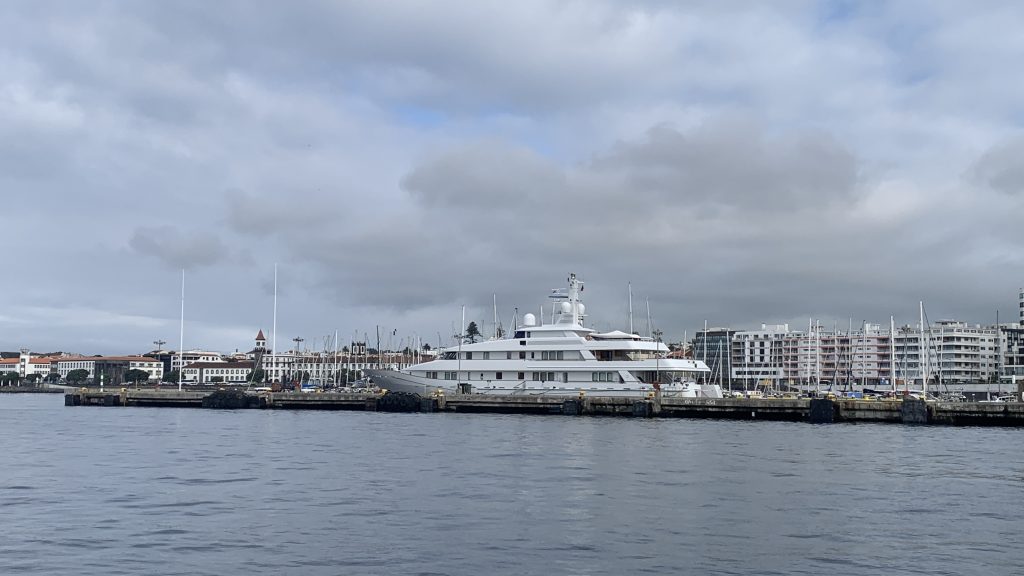 We agreed, that SY Hullu Poro will go first and SY Sutje second, so I can give Jan hopefully a hand as his Koopmans 46 is harder to manoeuvre in tight space.

PS: Yoshi was there and even motivated some other sailors to help us  finding a perfect berth and securing the lines. This TO community is amazing. Thanks Yoshi & folks!

…it feels like the Epilog becomes the Prolog now…

It was today, lucky 13 month ago, on the 14th June 2021, when we did throw the lines in Kappeln to start this journey –  or better our boating & biking adventures.
Since then, we clocked

3636nm on the log, over ground, as tracked in NFL and shown on the picture below. We also recorded

3467km in total on the bike, see snapshot from Polar. 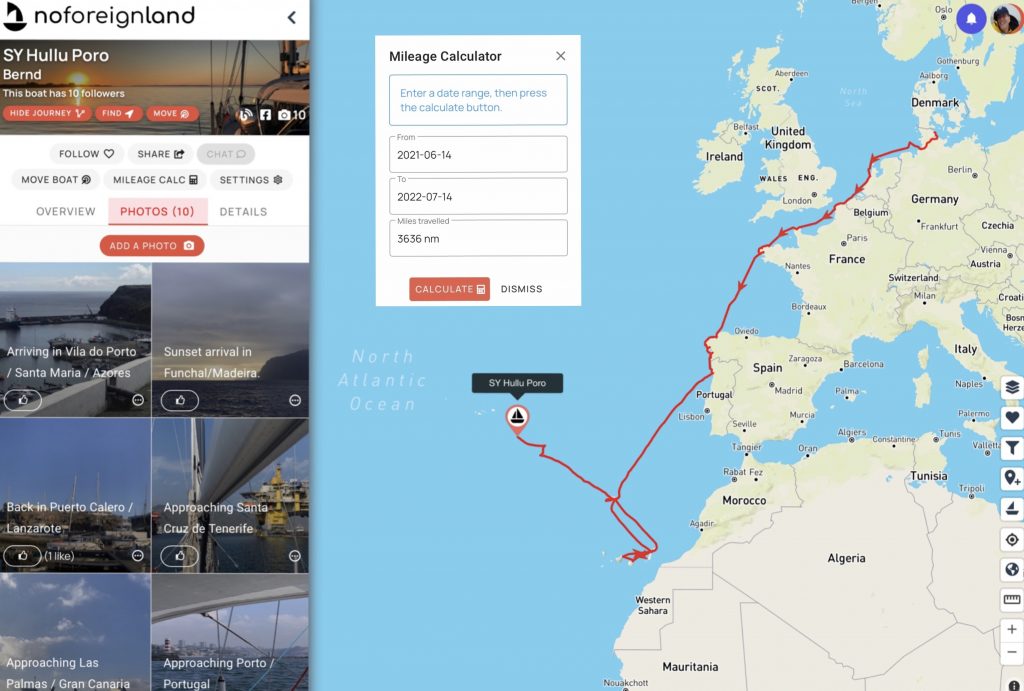 Despite some hardship now and then there is no doubt that fond memories are taking over and we had not only deep impressions at sea but also at land while sitting in the saddle. This all on top of the great people we interacted with, some became good friends, advisers, coaches and mindful listeners.
No doubt, there are these very short moments arising, where you are irritated to believe that someone else should better take care of the lady and its destiny but it’s all washed away in the next instance independent what you are just up to.

All this is encouraging and we are in the process of making some plans for the next 13 month. But as you know, sailors’ plans are drawn into the sand at low tide and wiped out at next high water level…approximately six hours later.

Therefore the Prolog better stops right here but there shall be exciting times ahead of us.

Thanks for your interest.