The weather window is still stable with a huge high pressure system near the Azores hardly moving, which shall give us some N to NNE winds. A bit stronger at the beginning and then hopefully enough to sail through to the target destination.

I had the pleasure yesterday to have coffee & cake with Gerlinde and Josef from SY Vitamine, a HR382 sailing under Austrian flag.

With a bright smile 😊 the Mariniero was standing next to the boat at 11am and handed over the parcel from HR Parts. Thu to Mo – not bad.
It is already installed and I look closely at the weather forecast.

We are making progress.  The new halyard from HR Parts is sitting at Lisbon airport and shall – according to UPS Tracking – be delivered tomorrow here at our doorstep. Let’t see and cross fingers.

With the help of the local sailmaker & rigger Toribio we managed to pull the old halyard robe/wire combination out of the mast. This cannot always been taken for granted but we were lucky and it came out easily. The new feeding line is set now inside the fast waiting for the halyard to arrive. It will then be a quick job to be completed and the lady is ready for the ocean again.

It all depends on UPS now and, obviously, on the weather.

The halyards on our lady are of the traditional style. Wire – Robe design with a thimble at the end covered under a shrinking hose as shown on the left picture. The leftover after the event is shown in the right photo – a deformed thimble without any wire.

Problem seems to be that you cannot look behind the shrinking hose to ultimately determine the condition of the swage connection around the thimble. The visual inspections done stopped at the outer surface of the shrinking hose.

Nowadays halyards – as many other robes on recent boats – are made out of Dyneema, a light but high strength robe with good chafing resistance. No more wires involved.

Two new Dyneema Halyards have left Hallberg-Rassy Parts in Sweden today and shall arrive in Funchal Marina coming Wednesday. Great support from HR Parts just on the day before the long Midsummer weekend starts. Within five hours from my phone call with Ludvig the parcel got handed over to UPS and is on its way.

Tomorrow I will try to retrieve the broken end of the wire, which still sits somewhere inside the mast. 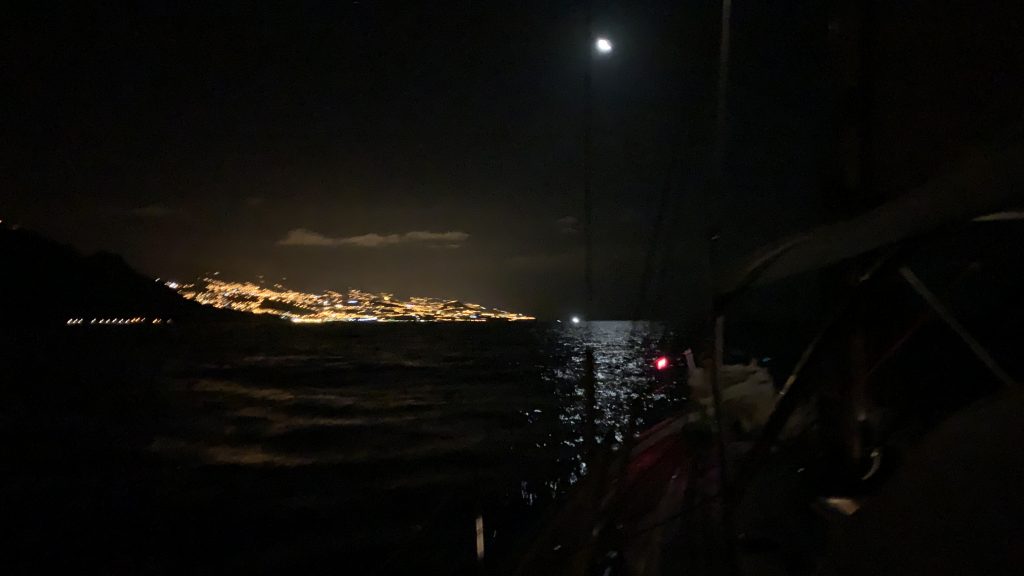 Less than 15nm towards Funchal. Cruising along the yellow dotted coastline of Madeira with 3kn boat speed. One fishing vessel on collision course, otherwise no traffic. Took a couple of short naps and a hot instant noodle soup. Afterwards a fresh cup of tea with a tiny chunk of chocolate.
Completed my sourcing of new halyard line. Hallberg-Rassy Parts seems to have them on stock for each individual boat model – great! We have got wire ending into rope. I will check tomorrow but my e-mail to Ludvig from HR Parts sits in his inbox.
I think the staysail is an excellent sail, which I have undervalued up to now. Will have to work more with that set-up in future.
Obviously some disapppointment that I have to return back but again I am falling with the nose into the cream. Glad it did not happen half way to Azores or in tougher conditions. It could have been managed but better address it early and get these type of things sorted.
I enjoy the learning curve and better address the fishing vessel now.
Fair winds…

We are good on the way. Madeira disappeared at the horizon and we tacked a bit later compared to what the weather routing software proposed. I guess “tacktics” out of personal preferences and comfort come here into play. My main reason was, that I wanted to have a bit more clearance from the island tonight.

The four night stopover in Funchal was great and the right decision. Chatting with the harbour master and his team, meeting some old and new sailing friends and getting the lady back into shape. I am now looking forward how this passage will evolve. Got time to get there until 2nd of July to arrive in Ponta Delgada, which comes as a hard stop with Susan touching down at the airport! I plan to arrive there much sooner but let’s see how it goes and what the high pressure system currently building up NW of the Azores has got in mind.

Got a short interaction with Intermar e.V. on the HAM radio after dinner, which was some bread with cheese and a carrot only tonight. My lunch after having left Funchal was delicious. I was fortunate and got offered some Indian egg curry made by Petra from SY Sutje. Very yummy, I could not deny. Pretty sure that I will need some more energy in terms of food during the night which is quite common for me during these passages.
The ocean is breathing in the way of long waves and same time slightly choppy from the wind…
+++hot from the press+++hot from the press+++hot from the press+++
While finishing the lines above some unusual noise kicked in. Looking to the bow, I see the foresail hanging loose. Oh oh…not good! The foresail had slided down a little bit and my immediate thought became true: jib halyard broken, damned! It is one of the few pieces we have not replaced on this boat. The running rigging has been inspected and found in order, until just now. However, there are worst things, which can happen and we need to deal with it. 2 hours work. Somehow I got the sail down and pressed into a sailing bag, not easy, not nice but out of the way. I first considered to lift it up again with the halyard of the Spi but I am not sure this is a good idea or if chafing will kill it in no time. So I waived this option. We are now under lovely staysail instead together with reefed main heading back to Funchal, ETA tomorrow morning at sunrise. I found it irresponsible to proceed under these circumstances especially as we have time and perhaps just have to change a flight from Azores to Madeira for Susan. Sorry.
Need to get a new jib halyard now. Sourcing has started.
Otherwise we are sailing into a peaceful night.
Fair winds…

After running 2 hours under engine, wind and waves on the nose increased to 25kn plus and I started to yell at all weather forecasts gathered before leaving. Luckily it turned out to be an acceleration zone around the western tip of Madeira.

We are now back to normal with 15-18kn making good progress in sugar conditions. It might not stay like this the whole voyage but let’s cross fingers, that Aiolos will be considerate to make this another passage in great comfort for us.