It was in the early hours after sunset when the first real squall approached us from behind. I was on shift, Susan in the bunk resting, our little Christmas tree spending some reflective athomosphere during this Christmas eve. Hm, this squall now disturbing my peaceful night. 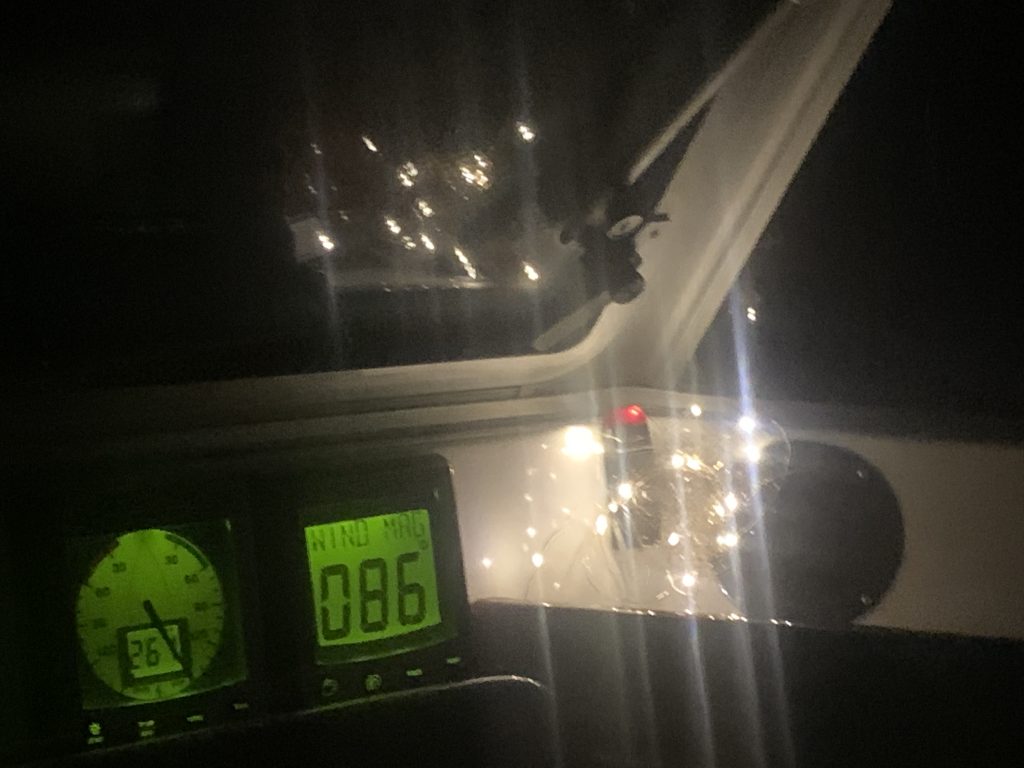 After a check on the radar, it was clear, it will hit us and it will hit us soon, only 2nm away, moving faster than the boat as usual, no escape. The light conditions during these nights allow us to see the clouds at the sky and the heavy dark ones surounded by stars have to be taken serioiusly. I threw everything from the cockpit under deck, undressed myself down to the underwear and closed the companionway including the sliding hatch. With a last glimpse of red light from the headlamp I saw Susan’s face enjoying some deep sleep. While the pouring rain took about 10min, just enough for a shower, the right away following gusting winds kept us busy for at least half an hour. It was our first squall of this very common pattern and I skipped the shower this time and focused on the action. The wind peaked at 45kn and the lady jumped into sprinting mode quickly reaching 9+kn speed through water, which is slightly above theoretical hull speed. I did loosen the reins and let her go. I did not reef sail but took over the steering manually from the windvane although it managed quite well. I just felt more comfortable to fly her through the water myself as long as it takes to let this squall completely pass through. Being wet but not cold, I was absolutely astonished by the fact, that the waves did not shake her around anymore. It felt like being on flat waters with the hull planing through and perhaps trying to escape but, no chance. The squalls are moving even faster and after a while the fascination was over leaving a cleaned cockpit and wet skipper in underpants.
It would be overstated to say, that I look forward to get more squalls now, but some fascination is still left from this ride.
Let’s keep watching the radar to be prepared.
Fair winds…